Blogger and cycling enthusiast "Mike R." recently came through Maysville, Kentucky on a bicycle trek that's led him from Columbus, Ohio, to Mt. Orab, through Ripley, into Maysville, Kentucky, Old Washington and south to Dry Ridge, then over to Indiana. And that's just as far as he's come already. His goal is to bike all the way to Mobile, Alabama. That's about 825 miles and covers almost 80% of the North to South distance between Canada and the Gulf of Mexico. Along the way he's stopping in at points of interest along the Underground Railroad, which of course is what brought him to Ripley, Maysville, and Old Washington.

The bike is called an "Air Caddy" and it's pretty cool looking. I have to admit my ignorance of cycling when I say I've never seen anything like it. Below is a picture of "Mike R." and his bike. 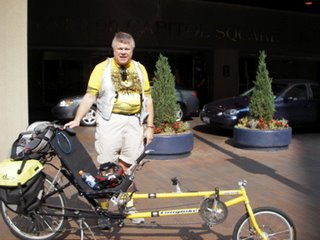 From his blog, The Speed of Bike:

"I cycled out of Mt. Orab this morning to get to one of the key spots on the Underground Railroad: Ripley, Ohio and then on to Maysville, Kentucky. Ripley was only about 30 miles down the road. At 9 am on a Sunday morning it was a quiet place, so I rode down to the water to look across at where so many slaves had crossed to freedom....

"We had a powerful day, standing where giant souls stood and worked. It felt like standing on the bank of the Jordan that place of liberation for Israel. Here, people found liberty, but at far greater risk."

posted at 1 PM by Jeremy Parnell

Very cool bike. It looks almost like a handicap scooter.

Thanks for the comment Ken. By the way, don't know if you saw it, but we posted about your art here.

You may be interested to see the Adventure Cycling Association's proposed Underground Railroad bike route:

This can be a great opportunity for Maysville and Augusta to show their southern hospitality to the many thousands of cyclists who may cross the Ohio while following the trail.

I am an avid biker, and I have found this particular part of the country very scenic and friendly towards cyclists.

Hopefully Maysville and Augusta's tourism offices are catering to the Adventure Cycling Association decision makers. This is a big deal.

Send comments, and suggestions to:

If you like this blog, check out Ken Downing's Mason County Kentucky Blog as well!

This work is licensed under a
Creative Commons Attribution 3.0 License