This is some example text for the blog's description. 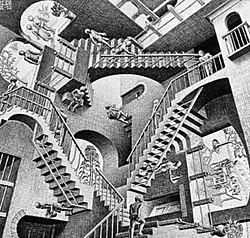 Well known examples of his work include Drawing Hands, a work in which two hands are shown, each drawing the other; Sky and Water, in which light plays on shadow to morph fish in water into birds in the sky; and Ascending and Descending, in which lines of people ascend and descend stairs in an infinite loop, on a construction which is impossible to build and possible to draw only by taking advantage of quirks of perception and perspective.

He used lithographs and woodcuts as media. In his graphic art, he portrayed mathematical relationships among shapes, figures and space. Additionally, he explored interlocking figures using black and white to enhance different dimensions. Integrated into his prints were mirror images of cones, spheres, cubes, rings, and spirals.

In addition to sketching landscape and nature in his early years, he also sketched insects, which frequently appeared in his later work. His first artistic work was completed in 1922, which featured eight human heads divided in different planes. Later in about 1924, he lost interest in "regular division" of planes, and turned to sketching landscapes in Italy with irregular perspectives that are impossible in natural form.